The IAB is developing a compensator for ensuring disruption-free 3D concrete printing using a truck-mounted concrete pump. A prototype is currently being built that is to undergo further testing until spring 2020

A feasibility study on the “CONPrint3D” formwork-free cast-in-place method conducted at TU Dresden confirmed that truck-mounted concrete pumps appear to be suitable for on-site additive manufacturing (3D concrete printing). In some cases conventional truck-mounted pumps feature an exceedingly long boom system whose motion is characterised by three-dimensional variations of several centimetres at its end. Among other factors, the low rigidity of the boom structure and dynamic excitation from the pumping process trigger such variations, as do acting wind loads. Whereas such undefined movements are largely negligible for the pumping process as such, they create a major problem when it comes to additive concrete manufacturing because the printhead mounted on the boom end needs to be controlled uniformly and evenly so that walls can be constructed within the evenness tolerances specified in the DIN 18202 standard. However, the previously proposed solutions for reducing boom movements of a standard truck-mounted concrete pump described in and have so far been insufficient for ensuring on-spec wall installation on the construction site. 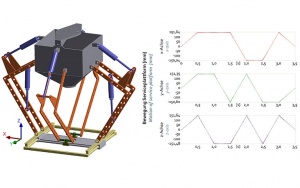 Kinematic design and MBD simulation of the compensator

Development of an electro-pneumatic compensator

IAB Weimar is currently conducting research jointly with -4H- JENA engineering GmbH to investigate the suitability of an electro-pneumatic compensator designed as a flexible hinge to connect the boom end of the concrete pump to the attached printhead. The compensator’s kinematic design includes relative movements to counter dynamic and stochastically distributed variations in order to allow for an additive cast-in-place concrete construction method that ensures compliance with specified tolerances. However, this project does not deal with controlling the truck-mounted concrete pump or determining the position of the boom end within the defined space. 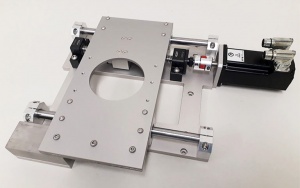 A specially developed model uses actual and target coordinates available at the printhead for calculating new control variables for the kinematics of the compensator, which comprises a static and a dynamic module in a cascaded arrangement. Around its zero position, the static compensator module is able to remove low-frequency disruptions within a range of ± 15 cm in three translational directions. Furthermore, the implemented kinematic system would also allow for controlling one rotational motion if and when required. The downstream dynamic compensator module is to eliminate higher-frequency disruptions and impacts on the boom end. Since it only removes the residual disruptions perpendicular to the wall under construction that the static module cannot compensate, the dynamic module has been designed with a control motion range of just ± 5 cm about its zero position. Up to 4 kg can be positioned in a maximum of 750 ms.

Based on single-module tests and application of the required target criteria, a prototype is currently being built that is to undergo further testing until spring 2020.